When USB flash drives are encrypted, users don’t have to worry about the data on them being accessible to someone who may have stolen their USB flash drive or happened to have found it somewhere.

To encrypt a USB flash drive, a user should start with brand new media or reformat the media they already have.

VERY IMPORTANT NOTE:  Before beginning the encryption process, users should copy or back up the data on the media to another media first so they can then copy it back to the encrypted media later. Otherwise, all data may be lost.

Step 1: Insert the media into the Mac.

Step 2: Go to the Mac’s Applications folder and locate the Utilities folder.

Step 3: Inside the Utilities folder, find the Disk Utility application. Double-click on its icon to launch it. A window similar to this screenshot should display:

Step 4: Click on the Erase tab and change the format to “Mac OS X Extended (Journaled, Encrypted)” using the drop down box as shown in the screenshot (highlighted in blue). At this point, users can type in a name for their media, which can help keep their media organized.

Step 5: Click the Erase button in the lower right corner and Drive Utility will then prompt you to enter a password before it begins erasing and encrypting the media. VERY IMPORTANT: If you create a password and then fail to remember it, you will not be able to access the data contained on that media. However, you will be given the chance to give yourself a “hint”, which will improve your chances of remembering. Just don’t make it easy for someone else to figure out. 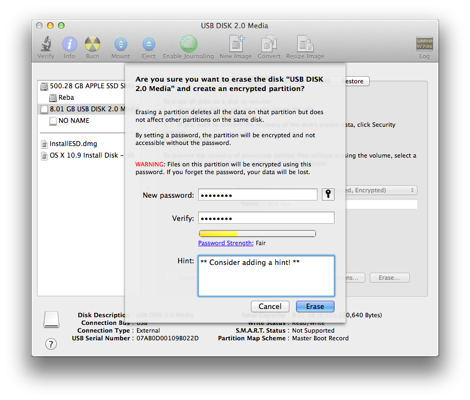 Within a few minutes, the flash drive will be encrypted.

Helpful security tip: Always drag your media off your Mac’s Desktop to your Trash and empty it properly. This will prevent others from being able to access your data by simply pulling it out of the Mac.

How to access encrypted data on USB flash drives

When encrypted media is plugged into a Mac, users are prompted to enter the password necessary to access the data on that media. 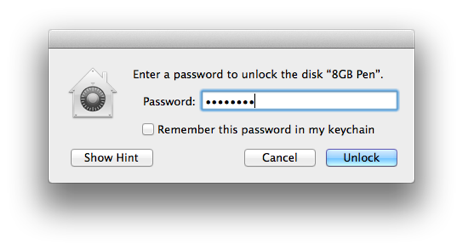 While a Mac’s Disk Utility program is easy to use, there is one important fact to point out when using it to create encrypted media:

The encrypted media can only be accessed with a Mac running Mac OS X “Lion” or later. Users who know the password can access the media and the data on it with any Mac running Mac OS X “Lion” (10.7), “Mountain Lion” (10.8) and “Mavericks” (10.9). The media is not compatible with Windows or any other operating system. Most flash media are pre-formatted for use with PCs running Windows but Mac systems can also access them. However, when users use the steps above to encrypt their USB flash drives, it will make their media Mac only.

When USB flash drive users follow these steps to protect their sensitive and personal data, they ensure their data can always be safe because encrypting media on a Mac is easy.

To learn more about ways to use USB flash drives or how they can help your business, contact us today.

© Copyright 2020 Mediafast. All Rights Reserved | Site By: i4 Solutions